No, not winning. I want to address two things in this article: why abandoning your spot on the Web in favor of Facebook’s walled garden is a terrible idea, and how you as a searcher can get around it if blogs insist on doing it.

It is true that posting something on Facebook is easier than maintaining a Web site. And if you’re interested in putting up a lot of images or video, Facebook makes that easy as well. Furthermore, you get immediate access to your communities – you can tag people, you can privately message friends without leaving Facebook. But all that comes with a price.

I’m not discouraging you from creating your own Facebook Page or Group; ResearchBuzz has a Facebook Page. But ResearchBuzz does not publish solely on Facebook.  Everything posted on Facebook is posted on the Web first, where anybody can read it without having to log in, and where it populates a full-text RSS feed that anyone can access.

But if someone wants to read ResearchBuzz on Facebook, all they have to do is “like” the Page, right? Then they’ll get all the updates.

That’s not how it works. I don’t think that’s ever how it worked but it’s gotten less and less true over time. A little over two years ago I wrote an article called Please Don’t Like Us On Facebook (Because There’s No Damned Point). At the time I noted that the last ten posts I put on the ResearchBuzz Facebook Page had an average reach of 1.43% of the “fans” of the Page. I just checked and the highest reach any of that Page’s posts have got in the last 24 hours is 80. That’s 2.14% of the Page’s current 3726 fans. And remember, that’s the post with the most reach.

My point is this: someone can like a Facebook Page and still stand a very small chance of seeing posts unless a) the Page pays to send the posts further or b) the Page obeys whatever current guidelines Facebook has in place for better reach (video, or status updates, or images, or whatever Facebook is favoring at the moment.)

Facebook needs to be a lot more overt about this fact, in my opinion, but that’s a subject for another article.

If the organic reach doesn’t bother you (or you’re lucky enough to be able to pay and get a better reach) then Facebook’s enforcement of its own rules – which seems arbitrary and almost random at times – might bother you as well. Facebook has in the past censored cartoon breasts, censored a picture of a man disfigured with burns (the images were posted with his consent), denied an account to a man whose real name is Arthur Pendragon, and censored a 16th century statue.

I believe there absolutely are times when Facebook should remove content – but in each of the cases I cited above, Facebook backed down after public outcry. If you run afoul of one of Facebook’s arbitrarily-applied rules and lose your content or possibly your account, do you really want your appeal process to be “managing to raise a public outcry”?

I know I’m not the only one who’s made these arguments. And I know that despite these arguments being made, there are still plenty of people who will use Facebook to post useful news and resources and not use the open Web. If you’re trying to keep up with the news, this can be really annoying. I do have a possible solution for you, though: Inoreader.

(NORMAL DISCLAIMER: This is not sponsored content, I paid for my Inoreader account, they don’t know me, do not taunt Happy Fun Ball, etc.)

Inoreader is an RSS feed reader, and while it does have a free option I should tell you up front I use the “Professional” level of paid access (there are four levels; it’s the highest) which costs $4.99 a month or $49.99 a year. That level of access adds a lot of options to the regular RSS reader, including integration with IFTTT, unlimited filtered feeds, and so forth – but the big deal to me is that you can follow Facebook Pages right from Inoreader.

(Inoreader really does a lot of different cool things, and if there’s interest I’ll explore them more.)

If you’ve ever used a Web-based RSS feed reader before, Inoreader is not going to surprise you. 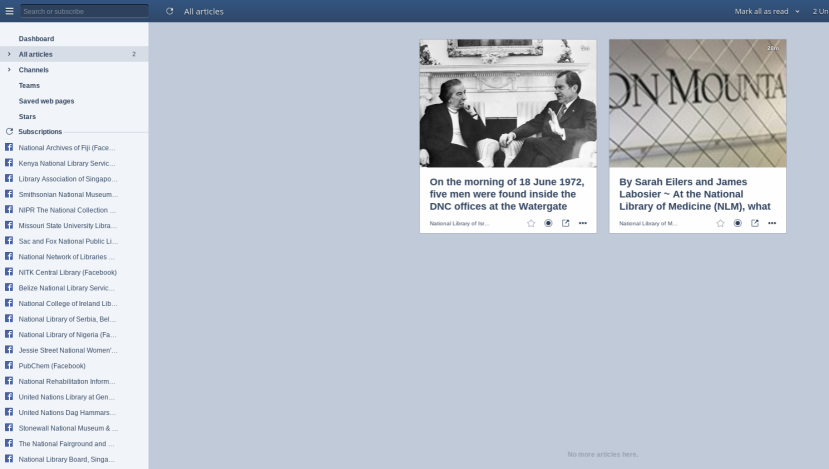 The only difference is the articles you’re seeing in the main window are Facebook Page articles and not RSS feed articles. Click one and you’ll get a popup showing you the article as it appears on Facebook. 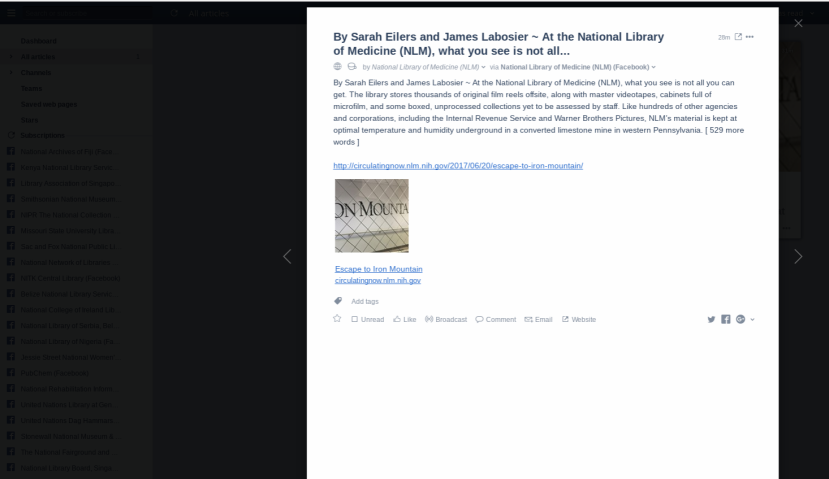 As you might notice from the first screenshot, this is my tool to keep up with the archives, libraries, and museums which have Facebook Pages but might not do a lot of updating on the open Web. Everything is aggregated in one place, I know I’m not missing anything, I don’t have to try to set up Facebook’s “see first” (which if it’s anything like the similar feature for Facebook friends, has a limit), and I have an archive I can review later without having to plow through Facebook.

And it’s super-easy to set up. Once you have an Inoreader account, you’ll need to connect your Facebook profile. (It doesn’t look like you can escape having a Facebook account if you want this to work. Sorry.) After you’ve done that, just enter the URL of a Facebook Page to the Search or Subscribe box in the left corner. Inoreader will detect the fact that it’s a Facebook page and will allow you to subscribe to it.

Now you have a page of recent posts that will aggregate with your other posts from followed Facebook Pages, and you don’t have to wonder if you’re missing anyone thanks to Facebook’s anemic reach. 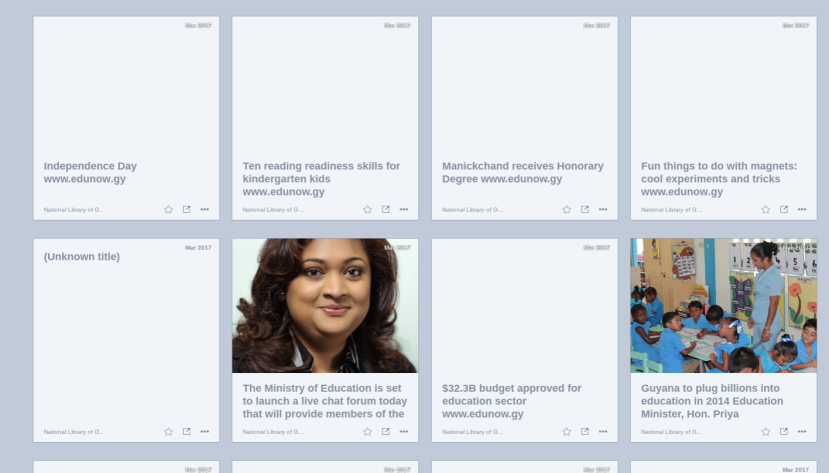 There’s one big downside. I mentioned earlier in this article that I use the “Professional” level of Inoreader. That’s because the free account is limited to 1 Facebook Page followed as a feed, as is the “Starter” level account (for $14.99 a year.)

The “Plus” level, at $29.99 a year, lets you follow up to 20 Facebook Pages as feeds. The Professional level has a much larger limit but it’s still a limit – 60 Facebook Pages followed as feeds.

That might be enough for you and more than enough. For me it’s still a bit frustrating as 60 is not enough to follow all the Facebook Pages I want to. Fortunately Inoreader does keep track of inactive feeds and gives me an overview on the dashboard, so I can review and remove inactive feeds. Inoreader also does a decent job of recommending feeds, so if I find an RSS feed that takes the place a Facebook page, I’ll use it. 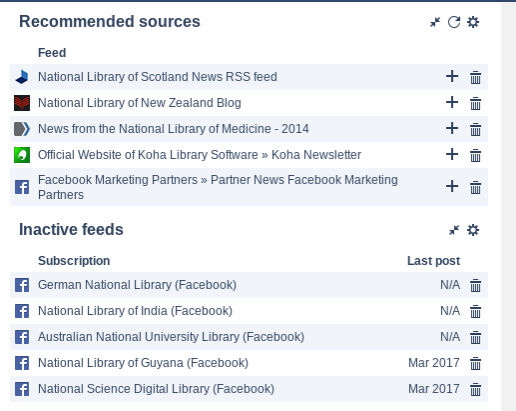 Facebook Pages could be a useful source of information on new tools, Web sites, and articles if it weren’t for the many hoops you have to go through to see all their content. Inoreader makes monitoring them a lot easier, and to me is easily worth the $49.99 a year.