Want to Get Away from Facebook? You Have Options

Once again I find myself with the intention of writing one article that ends up as another article.

While planning my work last weekend I put together an outline called A Roundup of Tools and Tips to Make Facebook Better, which was designed to address some of the privacy and productivity issues surrounding Facebook. However, with the Cambridge Analytica scandal still unfolding and Mark Zuckerberg’s continuing silence, I’m reluctant to write it. I feel that if I wrote an article like that I’d be saying, “There are specific things you can do to protect yourself from the chances of Facebook having a profoundly negative impact on our culture in general and you in particular.”

Frankly I don’t think I can say that anymore. I knew that Facebook, as a giant corporation answerable to its shareholders, would not be up nights worrying about the mental health of its users. I did not think that the exploitation of those users would reach the destructive pitch that it has.

I can’t completely leave Facebook; I have too many friends and relatives there. I’m not throwing the baby out with the bathwater. But I am going to work on disengaging myself and finding other social networks. It might be the same for you; I’m not here to make a judgement on whether you should stay on Facebook or not. Instead I’d like to offer a plea, a couple of options for partial disengagement, and a couple of alternative social networks.

I’m not here to tell you to delete your Facebook account right this minute. If you want to do that, great. If you don’t feel you can, I’m right there with you. But if you have any kind of Internet presence I’d like to ask you a big, big favor:

In April 2015 I wrote an article called Please Don’t Like Us On Facebook (Because There’s No Damned Point). In it I pointed out that the “organic reach” of my ResearchBuzz News posts on Facebook was less than 3% of the people who had “liked” my page. Therefore it didn’t seem appropriate to encourage readers to “like” my Facebook page since there was such a low chance they’d actually see anything from it.

Some organizations have gone in the opposite direction, however; in December 2015 the New Mexico Genealogical Society announced it was suspending its blog and its Twitter account in favor of posting exclusively on Facebook. So here’s my plea to you:

Please don’t do that.

Don’t arrange things so that the entirety of your content and community are in a walled garden. Don’t make people choose between remaining free of Facebook and having access to your information. You can set up a WordPress site for free, for example, and then use WordPress’ tools to automatically publish to Facebook. Don’t lock yourself in to a closed ecosystem that gives you very little control over your content.

Even if you haven’t limited yourself to publishing only on Facebook, people may find they like getting your content from Facebook: Facebook’s publishing tools make your stories easier to find and read, for example, or they may want to hear from commenters. There are ways to both post to Facebook and pull data from Facebook without actually getting into the main Facebook interface. And while one of the “pull data” solutions I’m going to show you is subject to Facebook’s algorithms and therefore still reflects Facebook’s control over what you’re viewing, the other one does not.

Inoreader — Last week when I wrote about RSS feeds and moving to NewsBlur, I heard from several people who like Inoreader, which is also an RSS reader. I like it too, and I have an account. But not for reading RSS feeds. I use it for reading Facebook Pages, as I wrote about last year. Facebook is so restrictive about how many of your “Likes” appear in your timeline that I was worried that I was missing a lot of Facebook Page posts. By using Inoreader, I get all the posts from a particular Facebook Page, and I’m not having to wade through a timeline to do it. One caveat: Inoreader is not free if you want to monitor more than a bare minimum of Facebook Pages. There’s also a restriction on the number of Pages you can monitor even with a paid account, but the limit should be fine for all but the most enthusiastic Facebook Page followers (it me.)

Nuzzel — Nuzzel is one of the three main tools I use for Web monitoring. The reason I found it and got into it is because it’s an easy way to review links from Twitter feeds, but it also pulls links from Facebook. My understanding is that what Facebook puts on your timeline is what Nuzzel puts in your Nuzzel feed, so you’re not going to see every link your friends post. But it’s a way to keep up with what your friends are linking to without directly accessing Facebook.  (Nuzzel’s a little different so if you’ve never seen it before, here’s an overview.)

Buffer — Buffer is not about getting information out of Facebook but putting information into Facebook. It allows you to schedule and share posts without going to the Facebook site. I use it for ResearchBuzz and also for personal links if I have a bunch of stuff I want to post (it’s better, I think, to pace links out over time than to drop a bunch of them at once.) Buffer is by no means the only site to do this; there’s also HootSuite, SproutSocial, etc. WordPress also has built-in tools to post to Facebook, and of course you can make “recipes” to post to Facebook via IFTTT.

There are a lot of articles floating around encouraging you to just delete your Facebook account. That might be too much to ask for many of us; there are entanglements and relationships that must be sorted out and moved before Facebook can be abandoned. Therefore I think that encouraging a more distant interaction with Facebook is a good intermediate step; use tools that can get you outside that site and that page and that timeline, and try to use those more as you explore alternatives.

On the other hand, maybe you’ve got this. You’re ready. You’re going to kick Facebook to the curb and head somewhere else. Okay. I’ve got a couple of possibilities for you. But first, a word of warning.

The two networks I’m going to mention here (and I’m sure there are many others, please feel free to mention in the comments!) are decentralized social networks. That means there’s not one place to sign up and log in; instead, you can host a version of the network yourself or sign up on someone else’s installation.

If you’re not tech-savvy this is going to seem really daunting. It reminds me of the early days of the Web when setting up a Web site (or buying a domain name – ugh) were complicated and while not exactly difficult, had a steep learning curve. I think we’re seeing the same thing here. It’s early days for these networks, and over time (if enough people are interested) tools will develop to make deploying and using them easier.

Until then, you can join nodes your friends have set up or which are available to the public. You don’t have to install these yourself. Just be aware.

Mastodon — https://joinmastodon.org/ — Mastodon is an open-source, decentralized Twitter alternative. An installation of Mastodon is called an “instance.” When you go to the Web site and decide to sign up, you’re directed to a list of “instances” that you can choose. There’s a general one you can sign up for called Mastodon.social; it looks like one of the largest instances available (not surprising since it’s run by the guy who started Mastodon.) Once you’ve signed up you’ll notice it looks a lot like TweetDeck. 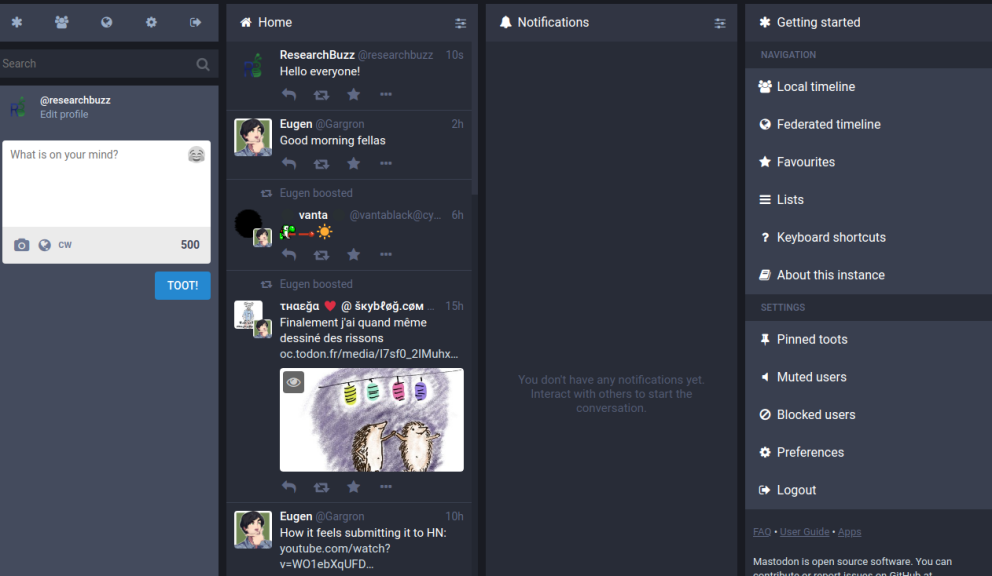 Mastodon has some significant differences from Twitter, including post limits of 500 characters, and a chronological timeline (imagine that!) I’m ResearchBuzz@mastodon.social if you want to say hello. (I think that’s how you write the address.)

Doing a thorough overview of Mastodon is a bit beyond the scope of this article, but if you’re looking for guidance here’s an overview from Quartz. I am also considering setting up a Mastodon instance (hosted Mastodon, not creating my own server). If you’re interested in that let me know in the comments; I could do a walkthrough. Oh, and if you’re looking for a Mastodon Instance to join, https://instances.social/ has a wizard that asks you a few questions about your preferred language and content and then gives you a list of Instances you might find interesting.

Friendica – https://friendi.ca/ — Friendica is another distributed network but doesn’t appear to have as high a profile as Mastodon. I’m including it here because it has a lot of tools for distributing data in and out of other networks. From its about page: “Friendica is a software to create a distributed social network. It is part of the federation of servers that are running with Friendica, Diaspora and Hubzilla which are compatible to each other…. Friendica is a communication hub that can not only talk to other Friendica servers but also natively to servers that are using the Diaspora protocol (Diaspora and Hubzilla) and the OStatus protocol that is used by GNU Social. Additionally you can use accounts of third party networks to read and post content with the use of Friendica.”

Friendica has a short list of recommended servers, so I signed up with Squeet.me. Friendica, as you’ll notice, has much more of a Facebook vibe than the Twitter look that Mastodon has.

I found Friendica a little less confusing but a lot quieter than Mastodon. If you’re interested in learning more about Friendica, Linux Magazine has an overview. Like Mastodon, Friendica is open-source and you can create your own installation or join an open server.

I wish I could make this a lot simpler for you. I wish I could write, “Facebook is awful, export your data and go here, it’ll be fine,” but I can’t. It is my hope that as more information is revealed about Cambridge Analytica and Facebook (apparently we’re only three parts into a five-part expose by Channel 4 in the UK) we’ll see more tools and more alternatives and ways to stay connected without giving ourselves up to exploitation, manipulation, and fraud.

And hopefully we’ll have learned enough that this overarcing destruction of our Internet ecosystem by a single company won’t happen again.